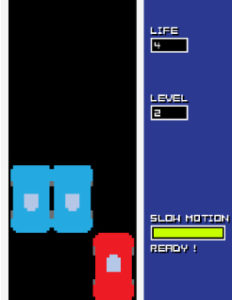 The game Super Race is an adaptation of a game of the Atari platform. It consists of deflecting opponents cars through the control of a car located at the bottom of the screen. As opposing cars move toward the player’s car, the player needs to change lanes to avoid collision. The difficulty increases the more cars the player can deflect. In addition, the Slow Motion mode can be activated to facilitate the drift of cars. In the project we tried to incorporate the language used in the Atari platform. In the project, we also tried to use as many concepts as possible in the classroom. Instructions: Car control is done by the left / right directional keys on the keyboard. The “s” key activates slow motion mode. 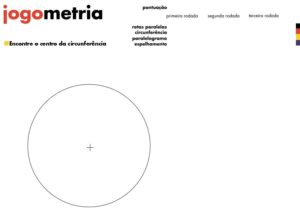 Game based on geometric shapes made to test how accurate the eye of the game is. The player goes through four challenges: finding the center of the circle, making two parallel lines, forming a parallelogram, and mirroring a line from an axis. The more points you make, the lower your accuracy. 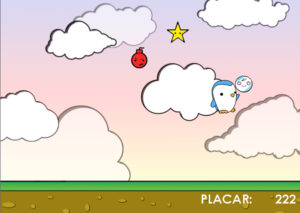 Based on the game “Head Defe nse”, the game features a penguin who needs to fight back to win points. How to play: Guided by directional arrows you can shoot balls that reward the player with punctuation, can also get stars or venture with bombs. Has a scoring system: to each star acquired the player gains 1 point; If you can hit the balls, you gain 10 points, but if you risk taking a bomb the game ends
Download Pinguim 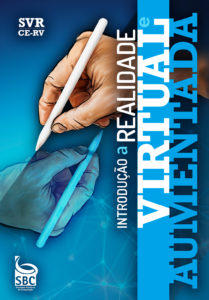