Established in 1991, the PCS has a long history, beginning in the 60’s. Here is the story of this pioneer group in Brazilian computing.

Computing in Poli – 20 years before PCS

In 1968, in order to begin a research with digital systems, a group of researchers from the Electrical Engineering in EPUSP, acquired a IBM 1620 PC with the specific purpose of studying it. This group called itself Laboratory of Digital Systems (LDS) and constituted itself with the objective of training graduate students in digital systems and software design. The first thesis on the area of Digital Systems versed about the integration of that computer with other digital systems developed by the group, like oscilloscopes, plotters and other peripherals. Other computers, like an IBM 1130 and a HP 2116 were acquired by the group in the following years. 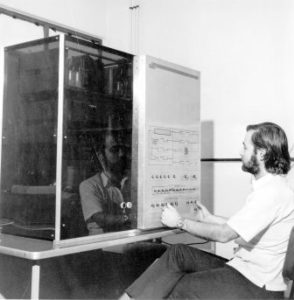 In 1971, the LSD invited the professor Jim Rudolf from Hewlett Packard, and Glenn Langdon from IBM, to teach courses and to develop joint researches. From a course on computer architecture taught by professor Langdon, raised the “Ugly duck”. The hardware and software of the first Brazilian computer, conceived as the final term project, concluded in July 1972, were totally developed by the LSD team. The computer had about 450 integrated circuits, distributed in 45 circuit boards. Its memory could store the equivalente to 4KBytes of data.

The name “Ugly Duck” was an allusion to the “White Swan”, a project that Unicamp was preparing for the Brazilian Navy, which made a call of proposals in order to equip the frigates with Brazilian computers. From this first computer, completely built in Brazil, the G-10 prototype was originated. This prototype served as basis for the first Brazilian commercial computer, the Sistema 500 (MC 500), launched by Cobra in 1975.

Support systems the user of the Anhanguera and Bandeirantes highways. (photo: Jorge Maruta, Journal the Usp/CCS)

Between the end of the 70s and halfway of the 80s, many other projects were led  by the LSD. The automation of trains of Fepasa, the support system of highways users, and one telephone centre are examples of projects led in that time. These projects were, at the same time, research projects which covered emerging areas of knowledge that result in theses and dissertations; technological developments, characterized by an expressive dimension on innovation; and cultural extension because they tried to serve a society that, in times when importing technology was very costly and difficult, looked for the University as a mean to solve real problems. By creating knowledge and experience, these projects shaped the personality of PCS.

The innovation was also administrative. In order to provide agility with the management process and to maintain the teams of technicians and engineers, the first foundation of support to the University was created – the FDTE, Foundation for the Technological  Development of Engineering – originating a model reproduced for other universities around the country.

Since 1984, the Law of Reservation of Market encouraged the Brazilian industry to produce software and hardware with national resources. Engineers graduated from the courses of Digital Systems had (and still have) a relevant role in national enterprises, developing applications in areas such as industrial and commercial automation, banking systems, medical equipments, telephony, among others.

The establishment of PCS

The Department of Computer and Digital Systems Engineering (PCS) of the Polytechnic School of the University of Sao Paulo was formalized on March 22 1991, having the Professor Dr. Francisco José de Oliveira Dias as the first head of department.

As of October 1991, with the end of the Law of Reservation of Market, the PCS find itself qualified to prepare professionals in the new phase of Brazilian computing, defined by globalization, by the spreading of technology, and by the effort towards quality and competitiveness in Brazilian industry. Thus, the 90’s was notable by the growth os academic research and by the appreciation of the undergraduate studies.

The diversity of fields in Computer Engineering inspired the specialization of professors and researchers of PCS. At the time, several professors carried out their Phd’s abroad, widening the competences of the group. The PCS organized itself in laboratories, which gathered researchers along themes of common interest, creating synergy for more relevant research.

The equipments and experiments of the teaching labs were improved and updated. In a practice that after turn out as an standard, several agreements were signed with software companies in order to make available, at no cost, commercial software packages and development systems to the students.

In 1999 the Polytechnic changed its curriculum, creating the EC-2. In Computer Engineering, the new curriculum matches the curricula of the courses offered by the PCS, which become different only for distribution in the year of academic modules Em 1999, a Escola Politécnica alterou sua estrutura curricular, criando a EC-2. Na and stage. The EC-2 curriculum sought to balance the offering foundation courses for engineering, hardware in training courses, software and computer systems and management and entrepreneurship courses.

A differential of the department is the closeness that exists between teachers and students. The PCS performs three times a lessons cycle coordination meetings between teachers of a class and its representatives. The result of this action is rapid problem solving, continuous improvement of courses and student satisfaction. Another important initiative for Graduation quality is to hold an annual workshop on graduation, in which the courses are discussed and important decisions can occur for changes in curricula. This strategy is important to tailor teaching to external demand and has been adopted by other departments and courses within the university.

At the same time, laboratories within the department begin to grow at a rapid pace, given the demand for world-class research.

At the same time, laboratories within the department begin to grow at a rapid pace, given the demand for world-class researchWithout prejudice to their competence in the Brazilian research scenario , PCS continues to maintain partnership with the domestic industry by offering consulting projects and continuing education and professional training in various areas of Computer Engineering, such as specializations in Software Technology and in information technology , initiated in 2001 .

The PCS is greatly concerned to train its staff , encouraging specializations and providing training applied to your work get better results. Because of this contact and work together, PCS members are responsible for many jobs and enormous relevance of research for society as a whole.